Nitorcarburizing is typically performed on steel components to improve surface hardness of the material via nitrogen dispersion.
One noteworthy finding however suggests that the corrosion resistance of the treated specimen was less than that of the control and untreated part.

The effect of nitrocarburizing on corrosion resistance of carbon steel (AISI 1020) is investigated in the work H. A. Ameen and K. S. Hassan. Test specimens, 20×10 mm, were manufactured according to the ASTM standard where one hour liquid nitriding at 550°C followed by liquid carburizing at 925°C for one hour, in a saline medium is carried out. The sight and microscopic hardness for the hardened layer after carburizing, nitration and nitrocarburizing are studied, as well carrying out a corrosion test via an electrochemical cell in sea water, where the test specimen represents the cell’s positive pole.

Tafel’s equation was adopted to calculate the corrosion average. The microstructures of all specimen group (nitration, carburizing and nitrocarburizing) were photographed. The resulting phases after each heat treatment were tested by x-ray diffraction apparatus. The results shown that the hardness of specimens increasing directly after the nitration, carburizing and nitrocarburizing processes. The corrosion average of the specimen after surface heat treatment was found to be less than that of the original metal.

Nitrocarburizing processes are conducted on steel components, e.g. valves, connecting rod of piston, crank shaft and cams in car engines, cutting tools and dies forming. The metallurgical basics of nitrocarborizing are applied to control the process and determination of the formed layer (white dispersion layer) by nitrogen dispersion in steel. The phases obtained by nitrogen dispersion in the steel surface is iron nitride Fe4N in γ iron up to 6% as well as Fe3N phase in ε iron up to 11% where these phases form the white surface layer. They are called white because it they preserve their colors after solution treatment by Nital (Figure 1).

Figure 1:Dispersion of nitrogen in steel

This layer consists of non – metallic phases called nitrides, the proportion of such nitrides depends on the chemical composition of steel, in high carbon steel, ε phase forms, in low carbon steel, γ phase form. Detection process of the phases requires sophisticated technology, e.g. x-ray. The formed surface layer is featured by its hardness and existence of alloying elements which unite with nitrogen or carbon to form nitrides or carbides. Hardness of low carbon steel is (300-400) HV and for high carbon steel is (700-1000) HV. Nitrocarburizing is performed at (530–600)°C and the depth of the formed layer ranges between (0.2-1) mm depending on the chemical composition of the base metal and treatment time.

The work of A. Ciski, T. Babul, presents the results of the microstructure, hardness, wear resistance and impact strength studies of samples made from hot working tool steel X37CrMoV5-1 subjected to nitrocarburizing at a temperature of 560°C with treatment time 4 and 8 hours. Nitrocarburizing attempts were carried out in order to assess the suitability of this method to practical use in the tools manufacturing processes. Before the processes of thermo-chemical treatment, samples were subjected to heat treatment consisting of quenching (austenitizing temperature 1030°C, cooling medium: nitrogen at a pressure of 0,6 MPa) and double tempering (temperature 525°C/2 hours and 580°C/2 hours).

Microstructure images of nitrocarburized (4 and 8 hours) samples are shown in Figures 2a and 2b. In the pictures can be visible not-etching and closely bonded with the substrate subsurface layers of iron carbonitrides which thickness depends on the nitrocarburizing time and is equal respectively approx. 2.5 μm and 5 μm, for the process time 4 and 8 hours. Obtained white layers are compact with low porosity visible in the outer parts, which may indicate low activity of nitrogen and corresponding carbon activity.

Figure 2:Microstructure of X37CrMoV5-1 steel after 4 h (a) and 8 h (b) nitrocarburizing process

Figure 3:HV0.5 (a) and HV1 (b) hardness of X37CrMoV5-1 steel after nitrocarburizing process 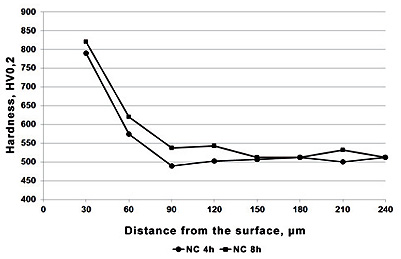 Based on the analysis of layers characteristics formed during nitrocarburizing process and designated strengthened steel properties, it can be said that the present method allows to obtain a layer with correct structure.

With the nitrocarburizing process strengthened steel has a much higher hardness and wear resistance than the material subjected to conventional quenching and tempering. Independently on the nitrocarburizing time, obtained layers had a similar wear resistance, while thermo-chemically treated samples had significantly different impact strength and, in a small way, hardness. Selection of nitrocarburizing time 4 hours seems to be appropriate compromise between the derived parameters such as relatively high surface and over cross-layer hardness, wear resistance and impact strength. Obtained diffusion layers confirm the practical applicability of the studied nitrocarburizing method in fluidized bed of X37CrMoV5-1 steel. With the intended application they could be used to strengthen the surface of tools used for plastics processing e.g. polymers for chemical, medical and food industry from which, besides its high wear resistance, is required high corrosion resistance, due to its work in medium containing acids and chlorides formed from the decomposition of thermoplastics such as for example PVC.

Mentioned nitrocarburizing method offers a number of advantages and benefits for its use in industrial practice, in comparison to bath, gas and plasma techniques. Among the advantages, the first to mention is an easy operation of furnace and the lack of liquid or gaseous technological media, because for a proper treatment is necessary only powder mixture with specified chemical composition. This feature provides also a low-cost equipment operation. This method is also harmless to the environment.