The Metal Injection Molding process is characterized by high pressure injection of powdered metals and binders rather than the conventional gravity fed processes.
The main applications for this technique are to produce small and often more complex parts often ranging in weight from 0.5 to 150g.

Metal Injection Molding (MIM) is a powder metallurgy process. The difference between MIM and conventional powder metallurgy is that in MIM, metal powder along with binders is injected under high pressure into the die or mold cavity instead of flowing by gravity.

The metal powder used for this is finer than conventional powder with particle sizes typically of 20 µm in diameter being used. Generally, the powder mix contains a much higher percentage of binders and flow agents. Wherein, binders generally include various waxes and thermoplastics. The compounded material is injected with conventional plastic injection molding machines (slightly modified) into metal dies normally having one to eight cavities.

The molded component is called the green part. The binders are first driven off either by heating, by solvent extraction, or by a combination of both methods and approximately 80% of the binders are removed. Debinding time is directly related to wall thickness. After debinding, the part is called the brown part which is porous and fragile but size remains the same as at the time of molding. The brown parts are then sintered as done in conventional powder metallurgy.

This is carried out in a vacuum or inert-atmosphere furnace at a temperature of approximately 1300°C depending on the material used for processing. However, sintering temperatures are generally well below the melting point of the material. The entire cycle including debinding normally takes about 24 to 36 hours.

As mentioned above, typical metal injection-molded parts are small and complex in nature. The process is more advantageous for more complex parts. In this process, high precision is possible to achieve. This method eliminates the constraint imposed by conventional powder metallurgy methods i.e. the side wall should be parallel. Very small size parts i.e. smaller than a golf ball in volume, weigh in the range of 0.5 to 150 g, and a wall thickness of less than 6.3 mm can be achieved using this method. It is possible to produce multi-functional parts with thin walls, sharp corners, undercuts, cross holes, screw threads, contours, gear segments, and similar features without secondary operations.

The densities of parts produced through this process are normally greater than those of conventional powder metallurgy parts, ranging between 95 and 99 % of theoretical maximum density. 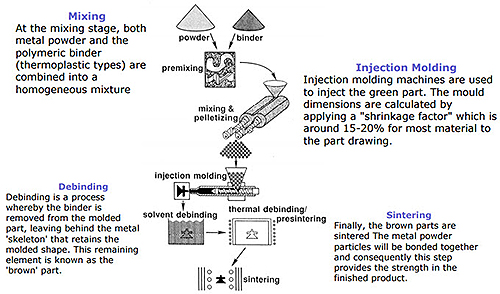 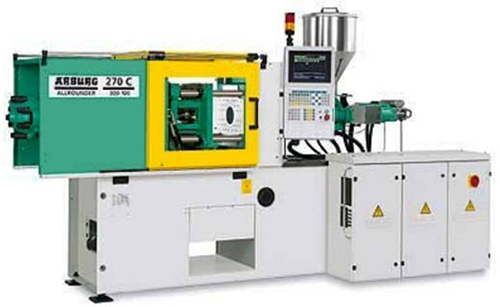