Investigations into the superplasticity possibilities of aluminums can lead to many potential gains in finding lighter yet capable materials in terms of strength performance.
This article covers the high-temperature deformation behavior of 5083 at different annealing temperatures and yields some interesting conclusions.

The microstructure evolution of the fine-grained 5083 Al alloy was investigated in an annealing temperature range of 150−300°C. Then the effects of the different annealed microstructures on high-temperature deformation behavior were studied and presented in the paper of Zhang K-f and Yan H-h.

The microstructure evolution of the fine-grained sheet during annealing was examined using transmission electron microscopy. Thin foils vertical to the rolling plane of the sheet and along the rolling direction were prepared by a twin-jet polishing technique using a mixture of 30% nitric acid and 70% methanol at −30°C. Uniaxial tensile tests were carried out with the loading direction parallel to the rolling direction on a testing machine equipped with a three-zone furnace. Tensile specimens with 10 mm in length (excluded round angle) and 4 mm in width were machined from the fine-grained alloy sheet of 1.4 mm in thickness and were tested at 380−570°C and strain rate range of 4.17×10−4−1.0 x 10−2 s−1. The fractographies of tensile specimens were analyzed by SEM.

Figure 1 shows the unannealed and annealed microstructures of the fine-grained 5083 Al alloy. The unannealed microstructure mainly consists of severely elongated grains along the rolling direction. These grains are mainly made of parallel bands of elongated substructures with high density dislocation, as shown in Figure 1(a). When the specimen of the fine-grained 5083 Al alloy is annealed at 150°C, the partial subgrains form due to the polygonization of dislocations, and many of elongated substructure boundaries are recovered into subgrain boundaries (Figure 1(b)).

This represents incomplete recovery characteristic including the formation of partial subgrain and the rearrangement of some dislocations. No recrystallization is found at this temperature. When the alloy is annealed at 200°C, the boundaries within subgrains are further formed due to the rearrangement of dislocations. Meanwhile, the width of subgrain increases slightly. This leads to the reduction of the subgrain aspect ratio. Additionally, a small quantity of nearly equiaxed fine fresh-grains is observed at this temperature (see arrow direction in Figure 1(c)).

The microstructure mainly consisted of distinct-boundary subgrains and small quantity of fresh grains. Namely, complete recovery and initial recrystallization occur at 200°C. Figure 1(d) shows that the fully recrystallized microstructure consists of equiaxed free-dislocation grains in the alloy annealed at 250°C. Most equiaxed grains reveal fully recrystallizing and coarsening grains to some extent. When the temperature is 300°C, grains severely grow up so that a whole grain is not observed in a field of vision, as shown in Figure 1(e). 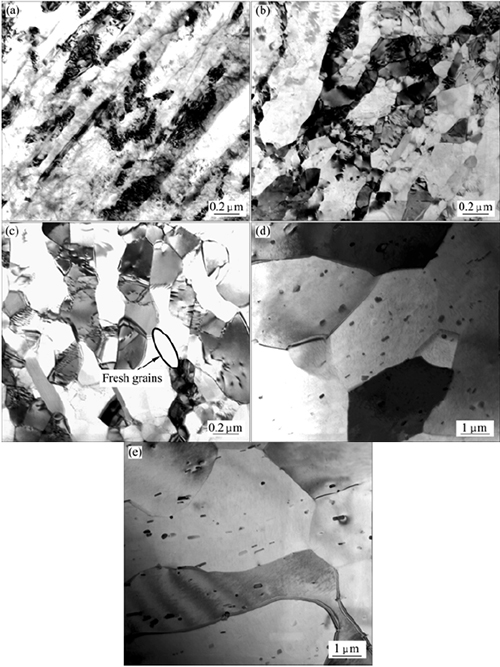 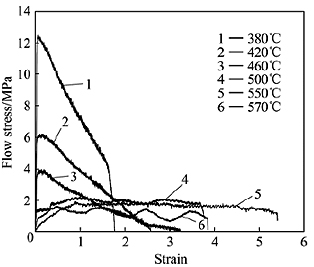 The workpiece was meshed with 7000 quadrilateral 4 nodes elements. A higher mesh density was applied to the workpiece-punch interface where the most of the material-flow was expected to occur. The result of a convergence error study in simulation showed that the number of elements used in this study was sufficient to accurately simulate the deformation of the workpiece during the microforming process. The punch and the die were modeled as rigid bodies. The material properties of the Al5083 provided by the manufacturer were adopted in the simulation: Young’s modulus 68.9 GPa, Poisson’s ratio 0.33.

Figure 3:FEM model for microforming process with multiple V-grooves.Figure 4 showed the flow stress of Al5083 alloy as a function of strain rate and temperature. The flow stress data obtained from the experimental result shown in Figure 4 were then introduced into Deform 2D FEM codes. 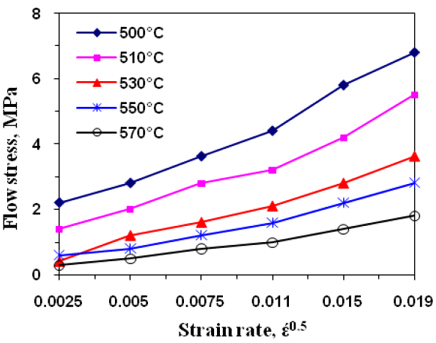