There are five typical methods of bending currently used in industry today: rolling, incremental bending, hot bending, rotary-draw bending, and induction bending.
Although ISF is generally very slow, it is of interest because no or only a simple and cheap tool is required, making the process ideal for small-series production.

There are five typical methods of bending currently used in industry today: rolling, incremental bending, hot bending, rotary-draw bending, and induction bending. Each method has its advantages. Some methods are more commonly used in the steel construction industry, while others are more common in the automobile or other manufacturing industries:

➜ Rolling (cold bending) is a continuous bending operation in which a long strip of metal (typically coiled steel) is passed through consecutive sets of rollers, or stands, each performing only an incremental part of the bend, until the desired cross-section profile is obtained. Roll forming is ideal for producing parts with long lengths or in large quantities. Roll Forming is generally a lower cost process than other metal forming processes. 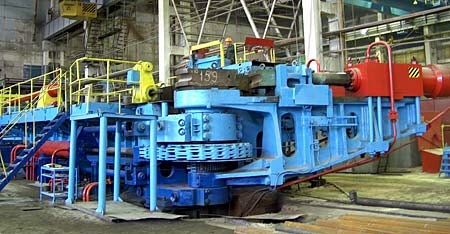 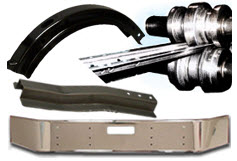 ➜ Incremental bending or gag pressing is usually used for cambering and curving to very large radii. Bending is achieved by applying point loads with a hydraulic ram or press at the member’s third point. In addition, incremental sheet forming (ISF) is a highly flexible manufacturing process suitable for low volume and rapid prototype production of sheet metal parts. The name incremental forming is used for a variety of processes, all characterized by the fact that at any time only a small part of the product is actually being formed, and that area of local deformation is moving over the entire product.

Incremental sheet forming (ISF), which is of particular interest, is generally carried out by having a small steel punch drawing consecutive overlapping contours over the sheet with increasing depth, thus creating a part of some depth. Although ISF is generally very slow, it is of interest because no or only a simple and cheap tool is required, making the process ideal for small-series production.

➜ Hot bending is the process by which a structural member is heated directly and then bent. The heat source could be a direct flame or furnace. This application is used extensively in repair. 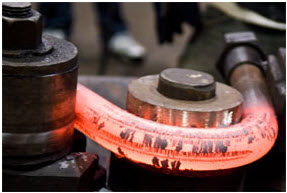 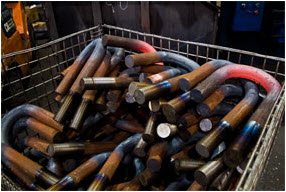 ➜ Rotary-draw bending is the process by which the structural member is bent by rotating it around a die. The member is clamped into a form and then is drawn through the machine until the bend is formed. This method produces tight radii and is mainly used for complicated bends in the machine and parts industry (Figure 4). 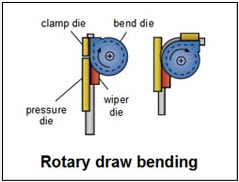 Figure 4: Rotary draw bending process➜ Induction bending uses an electric coil to heat a short section of a structural member, and then that member is drawn through a process similar to rotary-draw and cooled with water directly after. In some cases, this process can produce a smaller, tighter radius.

Induction bending is an efficient way to form a bend when only a specific area of a metal tube or pipe requires bending. The specific area is usually heated with the use of an induction coil in order to make the material easier to bend to a preset radius. Conversely, in hot rolling, the entire metal slab or billet is heated to between 800 and 2,200 degrees Fahrenheit and while the metal is still hot it is sent through rollers that are set to a controlled amount of weight that will change the metal to the desired size or thickness, the metal is then quenched with either air or water spray.

In summary, induction bending is usually used to bend a specific area of a finished piece of metal, where hot rolling, much in the same way as cold rolling, is a process used to change the thickness of a metal.

Almost any metal or steel product can be used in the induction bending process, this includes metal bars, pipes and tubes, and whilst with hot rolling processes, steel is the most commonly used metal. Most non-ferrous metals, these are metals other than iron or alloys that do not contain a certain amount of iron, are typically cold rolled.

There are many advantages that induction bending has over cold bending and to some extent even over hot rolling. The following are the top 6 advantages:

1) With induction bending there is the ability to heat a specific area of the metal pipe and this will ensure that a minimal amount of distortion occurs after the bend is completed.

2) This process results in a more energy efficient system since only a portion of the metal requires heating the power required to create the bend is kept to a minimum.

3) The induction bending process does not require any sand filling or internal mandrels, so the overhead costs are much lower.

4) Bending times are not as long as other processes, making this process more cost effective.

5) The overall quality of the product is better than that of cold bending, where excessive warping and wall thinning may occur.

6) And finally this process eliminates the need for mechanical or welded joints, resulting in a smoother finish.

Although there may be some crossovers in the way the finished metal products are used, induction bending is used on large pipes such as petroleum pipelines, and is also versatile enough to be used in making smaller products such as springs and farming tools. In the hot rolling process finished steel is typically used for sheet metal and comes coiled. These coils of sheet metal are either used directly by fabricators or as feed for cold rolling mills where they are later turned into sheet metal, metal foil and metal plates. 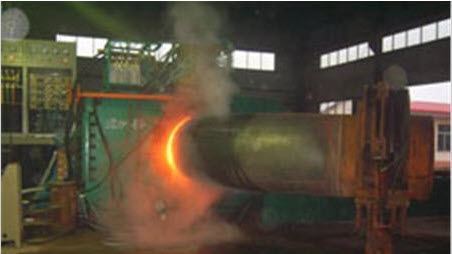 The last decade has shown a world-wide interest in what is called incremental forming. The name incremental forming is used for a variety of processes, all characterized by the fact that at any one time, only a small part of the product is actually being formed, and that area of local deformation is moving over the entire product. As previously mentioned, incremental sheet forming (ISF) is generally carried out by having a small steel punch drawing consecutive overlapping contours over the sheet with increasing depth, and thus creating a part of considerable depth.

Although ISF is generally very slow, its compatibility for small scale production (requiring no or only a small tool set up) is ideal. Another attractive feature of ISF is that strains can be obtained well above the common Forming Limit Curve (FLC).