Medium manganese steels should be considered in the same circles of many of the technologically focused and well known materials in the automotive industry such as AHSS, DP, CP as well as second generation steels.
Medium-Mn steels show a strong tendency for transformation-induced plasticity (TRIP) or twinning induced plasticity (TWIP) depending on the stability of the retained austenite.

First-generation advanced-high-strength steels (AHSS) have been developed by creating and modifying additional strengthening phases in the ferritic microstructure, like dual-phase (DP) steels, complex-phase (CP) steels, conventional transformation-induced-plasticity (TRIP) steels and martensitic steels. The second generation AHSS have been intensively studied since the 2000s. The second-generation AHSS are mainly high-manganese steels with austenitic single-phase microstructures. Taking advantage of various deformation mechanisms in high-Mn steels, such as dislocation slipping (SLIP), transformation-induced plasticity (TRIP), twinning-induced plasticity (TWIP) and microband-induced plasticity (MBIP), the second-generation AHSS manifest extreme ductility (total elongation up to 60%)with high strength (ultimate tensile strength up to 1100MPa). Although the high strength can be achieved in the first generation AHSS, the ductility is limited.

The high amount of alloying content in the second-generation AHSS has raised production cost and created various drawbacks in the production processes, for instance, Al2O3 formation during casting process, serious macrosegregation and microsegregation due to high carbon and manganese content, challenges to hot dip galvanization because of Al2O3 and MnO surface layer formation during continuous annealing, etc.

Efforts of the automotive industry to reduce carbon emissions of their vehicles has led to the development of a third generation of advanced high strength steel (AHSS) called “Medium-Mn” steels. Medium-Mn steels are capable of displaying transformation-induced plasticity (TRIP) or twinning induced plasticity (TWIP) depending on the stability of the retained austenite. By varying the annealing temperature used (within the intercritical ferrite+austenite region), one can change the stability of the austenite phase and make it more or less susceptible to either TRIP or TWIP.

While it is possible to simulate the microstructure that should be obtained for a certain composition and thermal treatment schedule, it is more difficult to accurately predict the mechanical properties of the steel due to the highly localized stresses/strains that can occur with TRIP and TWIP. It is thus of interest to understand the kinetics of the TRIP phenomenon as a function of strain if one wishes to properly simulate the mechanical behavior for a given microstructure or to correlate TRIP to the stability of the austenite via its stacking fault energy (SFE).

Microstructure of medium manganese steel annealed at low temperature is shown in The Figure 1. The phase in relief is austenite. The average grain size is roughly 0.45μm. 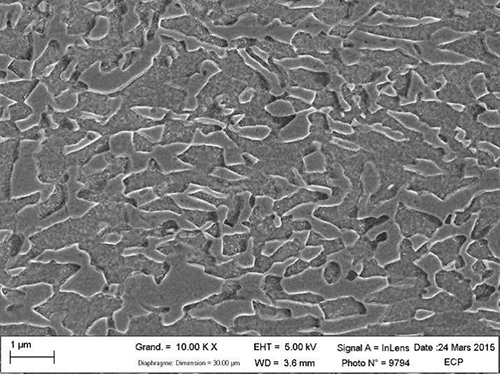 Figure 1: Microstructure of medium manganese steel annealed at low temperature after a 1% Nital etchAs seen in Figure 1, the microstructure contains austenite in a ferrite matrix. The exact morphology of the microstructure is unknown; it must be confirmed whether it consists of austenite “islands” completely surrounded by ferrite or if the two phases are intertwined. This will be accomplished by progressive focused ion beam (FIB) erosions and electron backscatter (EBSD) analyses of phase distributions and crystallographic orientations.

It usually contains 4–12 wt-% manganese in medium-Mn steels. On the one hand, the addition of manganese can lower the A1 temperature and increase the process window. On the other hand, manganese is intended to increase the hardenability and strongly reduce the critical cooling rate in steels. However, the addition of manganese may also result in poor weldability of steels. Moreover, the manganese concentration in medium-Mn steels is a crucial parameter controlling the deformation mechanisms. 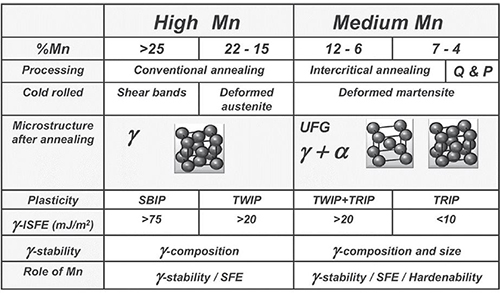