Although austenitic stainless steels are among the most commonly applied corrosion resistant steels challenges exist related to their relatively poor surface hardness and wear resistance.
Low temperature carburizing presents an effective solution to these challenges by increasing surface hardness through a carbon rich diffusion zone which does not compromise the corrosion resistance of the material.

Austenitic stainless steels are the most widely used corrosion-resistant materials in various sectors of industries, due to their excellent chemical and metallurgical properties. However, they are notorious for their poor friction and wear characteristics. Attempts have been made during the past decades to engineer the surfaces of this type of materials so as to improve their surface hardness and wear resistance.

Surface Engineering treatments for austenitic stainless steel are an interesting alternative way to increase the surface hardness and improve the wear resistance. It is nowadays widely accepted that hard, wear and corrosion resistant surface layers can be produced on ASS by means low temperature nitriding and/or carburizing in a number of different media (salt bath, gas or plasma), each medium having its own strengths and weaknesses. In order to retain the corrosion resistance of austenitic stainless steel, these processes are typically conducted at temperatures below 450°C and 500°C, for nitriding and carburizing respectively. The result is a layer of precipitation free austenite, supersaturated with nitrogen and/or carbon, which is usually referred to as S- phase or expanded austenite.

Some industrially proven processes work at lower temperatures. They have a hardening effect without affecting the original corrosion resistance-providing the base material is good quality. No coating is applied to the surface, but a carbon-rich (up to 2-3% weight rate) diffusion zone is produced from the surface inwards, with excellent toughness and no risk of delamination or peeling. It is low-temperature carburizing, at a diffusion temperature below 450°C.

The process increases the surface hardness of most austenitic stainless steels to a level of about 1000-1200 HV0.05, which is about five times the original hardness. High compressive stresses are formed on the surface, due to interstitial solution of carbon atoms. All austenitic stainless steels can be hardened using this process. The process has also been successfully applied to duplex and precipitation hardening stainless steel grades. Materials to be treated by low-temperature carburizing should be in the solution annealed condition. Sharp edges, the inside of bores and gaps present no limitation to the process.

Low-temperature gas-phase carburization dramatically improves the hardness, wear resistance and corrosion resistance of austenitic stainless steels. However, successful application of this technology requires in situ removal of the spontaneously formed Cr2O3-rich passive film which otherwise inhibits or prevents uptake of carbon during carburization.

On electropolished surfaces of AISI 316L steel, a 16 hour acetylene-based carburization treatment at 450°C generated a continuous case (hardened surface layer) with up to 15 at.% carbon and >3% lattice parameter expansion. This increased the surface hardness from 3.5 GPa to 13 GPa. As in earlier observations on 316L after activation with a different method, acetylene-based carburization produced a colossal supersaturation of the austenite with carbon, even though needle-shaped carbide particles were observed on the specific processing conditions applied here. The stoichiometry of the carbides was M7C3, which demonstrated a specific orientation relationship with the austenite matrix. Despite the presence of carbide precipitates, the pitting corrosion resistance of the material in the chlorine-containing environments was significantly improved.

In the work of Y.Ge was revealed a strong influence of surface finish on the efficacy of low temperature acetylene-based carburization of AISI 316L. Finer finished samples obtained thicker cases and larger surface carbon concentrations than coarser finished samples. TEM (transmission electron microscopy) revealed that the difference is due to the deformation-induced disturbed layers on the steel surfaces. A thick (>400 µm) disturbed layer consisting of fine nano-crystalline grains (≈10 µm diameter) inhibits acetylene-based carburization. Systematic experiments demonstrated that low temperature carburization is more effective after removal of this layer. 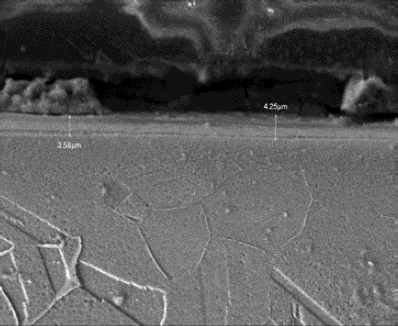