Hardening of steels and cast iron represents the most popular application of induction heat treatment. Induction hardening is a complex combination of electromagnetic, heat transfer, and metallurgical phenomena. On the other hand, induction hardening is an energy-efficient, in-line, heat-treatment process widely used in the automotive industry to surface-harden these kinds of parts at the lowest possible cost. The substitution of induction heating/hardening for furnace heating/hardening can lead to savings of up to 95% of energy used in heat-treating operations, in addition to the energy savings enabled by optimization and lightweighting of automotive powertrain components. 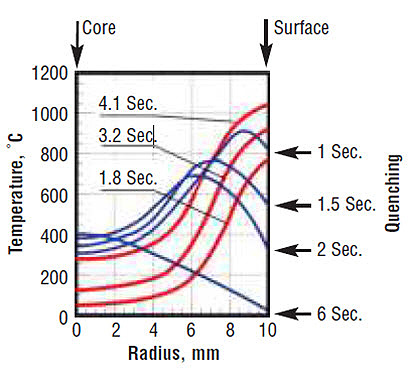 The traditional description of the steel hardening procedure involves heating the entire component, or a part of the component that needs to be hardened, to the austenitizing temperature, holding it if necessary for a period long enough to achieve complete transformation to austenite, and then rapidly cooling it below the martensite start (Ms) temperature, where martensite transformation begins.

For example, Figure 2 shows the dynamics of the induction heating of a carbon steel cylinder and its cooling during quenching for surface hardening. After 4.1 seconds of heating, the surface layer reaches a final temperature of approximately 1050°C (1920°F). The core temperature does not rise significantly due to several factors, such as an electromagnetic skin effect and relatively short heating time. Because of these factors, the heat soak from the surface toward the core is not sufficient to equalize temperature along the radius. 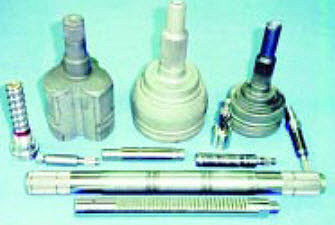 Figure 2: Dynamics of induction heating of a carbon steel cylinder (20 mm OD) and its cooling during quenching (F = 40 kHz); red is heating and blue is cooling

In some cases, heat treaters do not cool the part completely, and after unloading the part from the induction coil, it is kept for some time on the shop floor. During that time, the heat of the warm core travels toward the surface, eventually resulting in a uniform temperature distribution within the part. In this case, the remaining heat is used for a slight temper back (self-tempering), which imparts some ductility to the part.