Boride emerged as a good alloying option for iron based alloys to help improve toughness and specifically help in applications where wear resistance is important.
The addition of boron causes martensite transformation to a mixed state with austenite and this provides the platform for improved overall toughness in the material.

Boron is interesting as an alloying element in chromium white irons. It is more known as a micro-alloying element of steel, where it is applied in the amounts of several tens to several hundreds of ppm-s. There, its role is to ensure the necessary hardenability of austenite. However, since the application of carbidizing elements has become popular in the investigation practice of improving the properties of chromium white irons properties, it became normal to perform experiments with boron, bearing in mind its properties, especially the structural and electrochemical ones.

Sources of boron contamination, in addition to steel scrap, may include boron pickup from refractory linings and silicon carbide charge materials. The technical literature relating to the effects of boron on the mechanical properties of ductile iron are somewhat conflicting. Very low levels of boron have been reported to act as carbide stabilizers and promote pearlite while recently others have reported just the opposite effect. Boron levels in the range of 0.0011% to 0.0020% (11 to 20 ppm’s) reduce pearlite levels in pearlitic ductile irons and reduce Brinell hardness levels (BHN). Large quantities of pearlite stabilizing elements such as copper and tin are required to return to normal hardness and microstructures.

The effect of boron, in the amounts of 0.26, 0.39, and 0.59 wt.%, on the volume fraction and structure of carbides in Cr white irons was examined in the paper S. M. Tomović-Petrović, S.V. Marković, S. Zec. It was demonstrated that the addition of boron can change the microstructural characteristics of white iron containing about 13 wt.% Cr. With increasing boron content, the volume fractions of M3C carbide increase, but the volume fracton of M7C3carbide remains unchanged. The addition of boron tends to produce hard borides and/or borocarbides. It also prevents the formation of pearlite, which results in alloys possessing good wear resistance.

The microstructures of the examined alloys are shown in Figure 1. Detailed analysis confirmed that the structure obtained in this investigation is typical for chromium white cast iron. The base alloy (No. 1) is characterized by the presence of primary austenitic dendrite and a eutectic that consists of eutectic carbides and eutectic austenite. The structure of the other alloys also consists of a primary phase and an eutectic, but the following differences can be noticed: 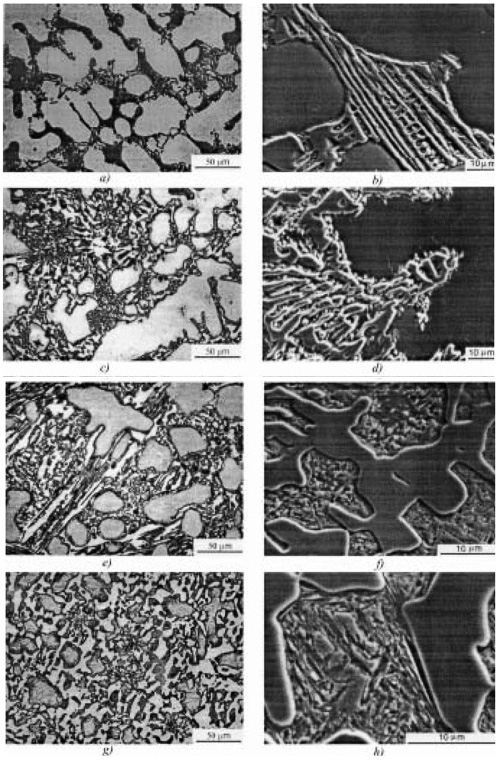