Titanium alloys have an extremely wide appeal due to a range of advantages including a very high strength to weight ratio, high fatigue resistance and biocompatibility.
Through gas nitriding, an established thermochemical surface treatment method, the surface hardness, corrosion resistance and friction coefficient can all be improved.

Titanium alloys are attractive candidates for aerospace, automotive, and biomedical industries due to their many advantages including, but not limited to, high strength-to-weight ratio, excellent corrosion/oxidation resistance, biocompatibility, and high fatigue resistance.

Gas Nitriding as a process, has been used industrially since the early 1920’s. The process is carried out in a sealed retort furnace at temperatures between 490°C and 530°C in a flowing Ammonia atmosphere for times up to 120 hours. Gas nitriding delivers hardened steel as the output. In many instances where hardened steel is the specifrication, then gas nitriding could be the ideal process to adopt.

Process of gas nitriding is one of the methods used for thermochemical surface treatment. It was first developed in the early 1900s by Adolph Machlet. It involves the diffusion of nitrogen into the surface of metal to form a nitrided layer e.g. titanium nitride. This diffusion process is based on the solubility of nitrogen in metal. In this study, a differential scanning calorimeter (DSC) was used for this process. Nitrogen gas was supplied to the DSC chamber at a constant flow rate and at a specific temperature.

A thin nitrided compound layer, TiN, was formed at the top surface layer of the sample after gas nitriding. This method of nitriding can improve the surface hardness, corrosion resistance, fatigue and fracture performance, wear performance and friction coefficient. It can easily form a harder layer on the surface of the material. High temperatures of 650° to 1000°C and a long period of nitriding time between 1-100 hours are required in this process. Zhecheva et al. have been successful in increasing the surface hardness for both Ti-6Al-4V (α + β) and Ti-6Al-2Sn-4Zr-2Mo-0.08Si (near α) alloys. This was due to the mixture of TiN, TiN0.3 (similar structure to α-Ti), Ti2N, TiO2 and nitrogen enriched titanium formed at the surface.

The treatment is usually conducted in a furnace with a gas atmosphere control. Pure nitrogen, nitrogen/argon gas mixture, nitrogen/hydrogen gas mixture, or ammonia can be used as the nitriding gas resource (Figure 1). The general procedure is first the furnace is evacuated, then a flow of gas is introduced in order to reach atmospheric pressure. The thickness of the surface layer and the value of the microhardness depend on two parameters-temperature and time. Traditional gas nitriding, which has been favored by metallurgists and engineers for many years, now is being challenged by more recent techniques such as controlled nitriding, ion nitriding, enhanced ion nitriding and RF nitriding. Controlled nitriding and ion nitriding have gained acceptance and now are commercial techniques. Controlled nitriding is a development of the traditional gas nitriding in which all of the process parameters are computer-controlled, including a gas panel for precise gas mixing and flow measurements, the process gas-analysis system, the process gas pressure within the process retort and process temperature and time. Process parameters are monitored on a continuous basis via computer, and precise adjustments are made to the process systems to ensure repeatable metallurgy in relation to the load surface area and the load mass. In the gas nitriding practice, the oxygen contamination is very hard to control.

The processing gases all have a certain level of oxygen impurities in the form of oxygen gas or water vapor. Gas leakage through heat treatment facilities also introduces the contamination. Titanium alloys with a high level of oxygen have a tendency to form the brittle α phase on the surface which has a detrimental effect on mechanical properties. 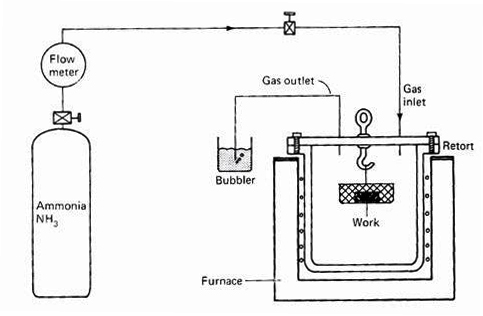