Dispersion strengthening of any material is done with the aim to create a composite of superior physical properties via the dispersion of oxide particles in the metallic matrix.
High energy ball milling provides a repetitive fracture/weld method to achieve a homogeneous dispersoid distribution.

Oxides are fundamentally different than their metals. They have a much higher melting point, are normally less than half as dense, and have a significantly different electronic and crystal structure. Most differences between metals and their oxides arise from a difference in interatomic bonding. Most oxides are covalently or ionically bonded indicating that electrons are localized while in metals, electrons are delocalized and can float through the atomic lattice.

From these subtle yet important differences it is not apparent that a dispersion of fine oxide particles in a metallic matrix will create a composite with better physical properties than the original alloy, though this has been shown to be true. The first mention of oxide dispersion strengthening in literature appears in the Transactions of the American Institute of Mining and Metallurgical Engineers in 1957. The creep resistance of the alloys made by this process is higher than the base alloy.

Dispersion strengthening is a well-known procedure used for improving the hardness of metallic materials. Dispersoids can be introduced by a variety of methods but “Mechanical Alloying” was a breakthrough enabling obtaining of a homogeneous dispersoid distribution. The processing route involves high-energy ball milling of the starting powder mixed with a dispersoid. Attempts have been made to produce dispersion strengthened copper by mechanical alloying using alumina particles of various sizes.

The high-energy ball milling powder process, through repeated fracture and welding of powder particles during ball-powder-ball and ball-powder-container collisions, enables achievement of a regular distribution of fine Al2O3 particles in the copper matrix. Such Al2O3 dispersoids contribute to the copper matrix strengthening providing resistance to dislocation motion according to Orowan’s theory. The oxide dispersion strengthened alloys, produced by mechanical alloying, are characterized by the presence of extremely small oxide dispersoids ranging from 30nm – 40nm, uniformly distributed in a very fine grain sized structure (<1μm in diameter). The aim of this work was to estimate whether commercial alumina particles with an average particle size of about 0.75μm could be broken down during milling and achieve the dispersion strengthening effect in Cu-Al2O3 alloys.

Figure 1 shows the mixture of Cu+3wt.%Al2O3 powder particles before milling (Figure 1a) and the development of Cu-2.5wt.%Al particle morphology with increasing milling time (Figure 1b-d). Figure 1 shows that 3h of milling time leads to particle coarsening, while 10 and 20h of milling followed with the formation of equiaxed particles. After 3h (Figure 1b) the milled powder particles are rather flattened as a result of strong plastic deformation occurring at the very beginning of milling. 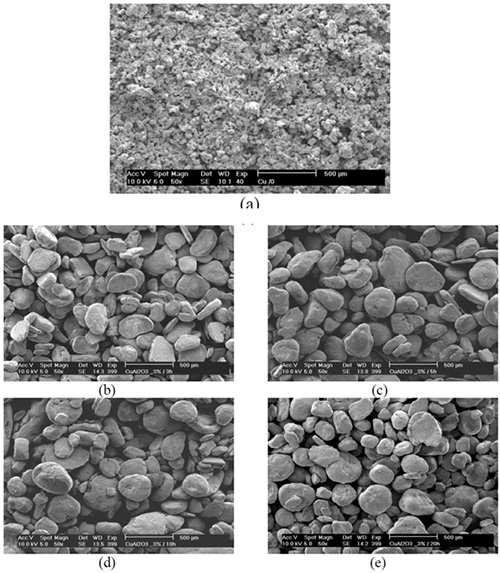