Cryo-rolling is effectively deformation of materials at liquid nitrogen temperature (LNT) that assists in producing ultra-fine grained microstructures.
Resulting gains can be made in the mechanical properties of the material and in studied cases, it was found that with a 40% thickness reduction through conventional and cryo-rolling techniques and improvement in hardness can be made from 85HRB to 90.8HRB respectively.

Commercially Cu and its alloys are extensively used for various design application where high strength to weight ratio is one of the basic criteria. Conventional rolling could be a suitable technique for the commercial production of bulk ultrafine grained Cu alloys sheets but due to dynamic recovery and high stacking fault energy of Cu and its alloys, it is difficult to produce ultrafine grained microstructures in the samples.

Cryo-rolling, i.e. deformation at liquid nitrogen temperature (LNT) has been attempted on several metals to obtain very fine grain sizes and improved strength levels. On the other hand, the CT rolling has been applied to the commercial Al and its alloys which can refine the grains in the materials with less plastic deformation than other SPD process.

Recently, there is a great interest in bulk ultrafine grained (UFG) materials due to its excellent mechanical properties and good plasticity. And several severe plastic deformation (SPD) techniques are considered the effective methods for fabricating such materials. However, UFG materials produced by SPD usually have high strength but disappointingly low ductility.

A large deformation at cryogenic temperatures is considered as a promising and cost-effective method for producing bulk ultrafine-grain materials. However, recent detailed microstructural observations of cryo-deformed copper have revealed no significant grain-refinement effect. This disappointing finding has been related with a retardation of the formation of dislocation boundaries due to the suppression of cross-slip under cryogenic conditions. On the other hand, pronounced microstructural refinement has been found during cryogenic deformation of commercial-purity titanium and alpha brass and has been attributed to extensive mechanical twinning and shear banding. From these observations, cryogenic deformation was concluded to be particularly effective for the materials prone to activation of these two deformation mechanisms.

The influence of mechanical properties and microstructure of commercial pure copper by cold and cryo-rolling have been investigated in the paper of J. Paghadal and K. Changela. Cu was rolled in four high rolling mill for different thickness reduction 20% and 40% at cryogenic temperature and at room temperature and its mechanical properties and microstructure were studied. After each successive pass material is dipped in liquid nitrogen container to achieve cryogenic temperature in cryo-rolling. For cryo rolled sample it is observed that mechanical properties like hardness and tensile strength has sudden improvement compared to cold rolled sample. This was because of higher dislocation density during lower temperature rolling.

Figure 1: Hardness chart for copperBelow Figure 2 and Figure 3 indicates Load vs. Extension graph for pure copper in tensile testing machine. Cryo-rolled copper exhibit a significant improvement in mechanical properties like hardness and tensile strength compare to room temperature rolled alloy for 20% and 40% thickness reduction. This is because of suppression of dynamic recovery and accumulation of higher dislocation density during lower temperature rolling resulting in higher strength. 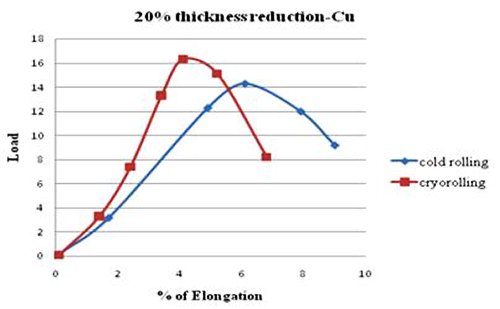